You know when you have a great family and wonderful friends you are never really alone.  Matthieu took the boys to Spain for Julien's wedding this weekend and I had to stay here.  Alone.  I have Moose and MIL's cat, of course, but it's not the same as having people to hug and talk to.

Everyone went out of their way to make my weekend wonderful.  Julien and Henar sent me flowers, wishing I was there but it was for a good cause.  They sent a note with directions to an email account with a sweet message and a photo slide show just for me.  Then, on his way to the church, he called me to say that they were thinking of me. Isn't that the sweetest.  He was also checking to see that I got the flowers and to tell me that Philippe (who had been feeling sick) was feeling a lot better.

I've also gotten regular calls from Matthieu with reports on poor Philippe and Anthony and then at the meal (that started at 10pm!!!) just as the kids were about to sing the song they prepared.  I was crying, especially when they got to the part where they welcomed 'aunt Henar'!!  It was not the first time I cried this weekend.  I haven't shed soooo many tears in a long time.  Good thing most of them were happy tears.  Mom called too and we had a fun chat.

So what did I do on my weekend alone?  I went to IKEA and got a LOT of fun stuff to organise, including a bookcase.  I carried up each piece one by one and put the thing together and got everything all set up on it.  Unfortunately it's dark now, so I will have to wait until tomorrow to take a pic.  I did have a little photo shoot with me, myself and moose.  Gotta love my timer but I think I'll add a tirpod to my letter to Santa this year.  Oh and I rested!!  Boy did I rest!  8 solid hours each night.  I woke up once after about 6 hours the first night and realised that I hadn't even moved.  I rolled over and went back to sleep :)  Boy did my bed seem HUGE!

Ok, so I'll leave you with my flowers and Moose.  The outfit, I totally stole the idea from Amber, but unfortch, I don't have her incredible photoshop skills, so basically these are all unedited here... 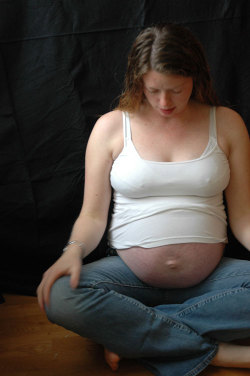 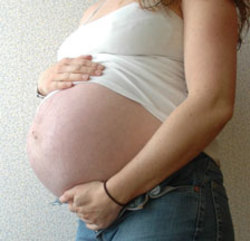 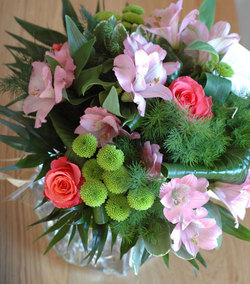 On Monday morning, as I was helping Anthony get ready for school I noticed 2 pimply things on the cut from where he had fallen last week.  I hoped it wasn't some weird infection and then sent him off to brush his teeth.  As I was inspecting his pearly whites, I noticed another spot on his lower jaw and another on his neck and another and another down into the collar of his shirt.  CHICKEN POX!!  I knew it right away because there had been a few cases at school.   I took him to the doctor later that day which was quite the experience as it was at 7pm with 3 tired and hungry boys and then off to the pharmacie to get our enormous bag of goodies.

Tuesday was a bit rough as he was more tired than anything but the itchies wouldn't let him nap.  He has spots on his eyelids and in his throat so we really can't do much to help relieve the itch.  Same thing that night.  So, of course, that means that I didn't nap or sleep that night.  Yesterday, he was feeling much better.  Especially after taking a 2hour nap in the morning and a 4hour one in the afternoon, lucky boy!!  I did get 1hour in there though ;)  Last night he was up and playing Webkinz until 11pm but then slept soundly until 7am.  He's not allowed to go to school until late next week, but I'm sure he'll be fine come Monday.

I'm actually glad that he's got them now and that he's probably infected the other  2 and they'll start getting spotty in about a week...  they have to get them sometime...  The only problem is that this weekend is Julien and Henar's wedding and Anthony (along with his brothers and all his cousins) is standing for them :P  Plus, Emilienne broke her collarbone, so I guess they'll have to hide those two at the end of the procession ;)

Matthieu is leaving and flying down with the boys tomorrow night.  I'm too far along to travel, which sucks, but I'm actually looking forward to a weekend alone to get crafty!!  I just got a nice box of Christmas Flair goodies today and I've got lots of projects that I'd like to finish up before Moose comes along.  Only 5-6 weeks left people!!

Oh and sleep!!!  I am sooooo excited about 2 complete nights ALONE!!  No little bodies crawling into my bed in the middle of the night, little bodies that smell sweet and cuddle close but wriggle and kick nonetheless.  Two mornings that I can get up when I want, not when a little voice says 'beckfest, Mommy!  Come!'    I can take naps when I want, not when I can squeeze one in.  I plan on being a very rested gal come Monday... 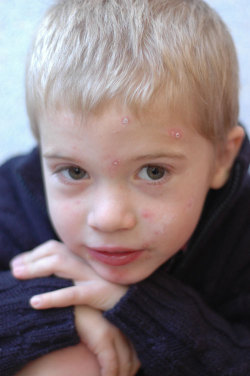 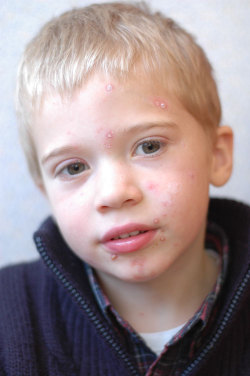 Ok, so, today and yesterday I turned the house upside down and minimised all the toys around here.  I put 3.5 recycle bags full of toys up into storage.  I did have 4 but Philippe found the megablocks train and bus and started playing with them.  I realised that the reason he wasn't playing with them before was because they were hidden behind piles of other toys :P  Things look great, everything is organised, and the boys were actually a great help, and didn't mind storing some of their stuff away for a few months.

So, anyway, that conversation...
Anthony was at a birthday party when we started sorting, so when he came back Jacques was explaining what we were doing...

Jacques:  We putting some of the toys upstairs so that it'll be easier to play and to clean up... then when we get to take them back down again, it'll be like Christmas!!

LOL!  I'll leave you with a LO of the two of them :D  I made it with the October kit from the Nook, come here to find out more about our DT call and Virtual crop!! 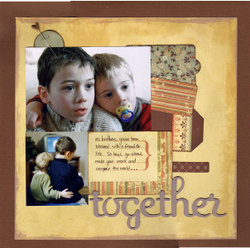 I recently got a box of Flair goodies and here are a couple of LOs that I made :D  I am sooooo loving the new calendar things!!  Had to start with Feb, love me some purple!!  Check out the new blog!! 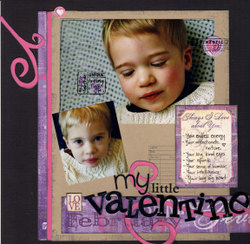 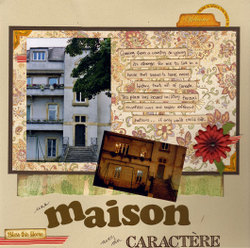 Amber had her baby this morning!!  I was talking to her on the phone after she got home, yes, HOME!!  She seemed to be doing well and I could hear his sweet little voice in the background.

Here's a clicky to her blog for the stats and a few pix... 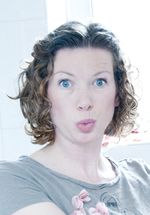