Habit Tracker Ideas to Get You Started Tracking!

As we get closer to another new month, it's a great time to think about a new habit to track in July. 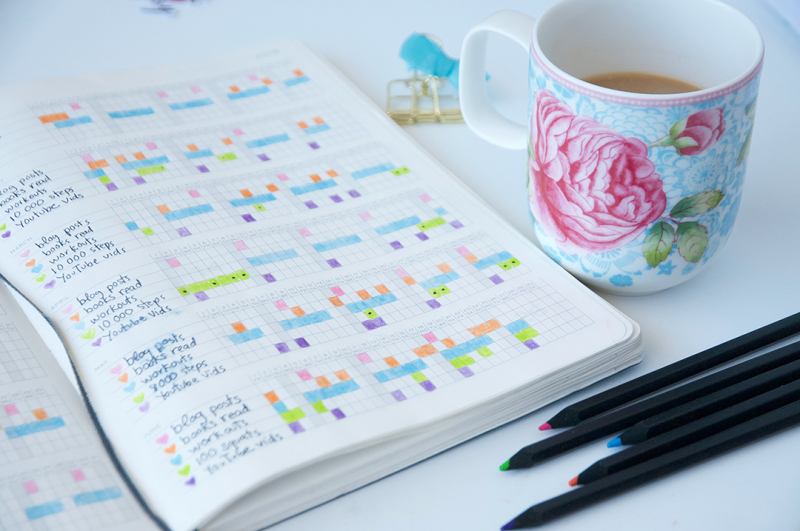 Trackers are everywhere, there are coloured ones, shaped ones, daily ones, water trackers shaped as water bottles - you can track just about anything in just about any way you'd like. Fun shaped and intricately designed trackers are trending in bullet journalling right now and it's not just for fun! Don't pass this off as just another trend, use habit trackers to really improve your life by adding in new habits to you daily routine. Habit trackers are a fab way to make new habits stick. Tracking can really help you to get motivated when you're just not feeling it and to really make progress towards your goal. They motivate and encourage, when you see your progress and success there in full colour it gives you a boost to continue. It's like that gold star stickers for adults. Hey, why not use gold star stickers as your tracker :D

It seems everyone is tracking their water intake and exercise, but there are so many things that you could be tracking. Two weeks ago, I gave you a huge list of 28 habits to try. Pick one of those and start tracking. However, if these habits are all new to you, I actually DON'T suggest that you start there! It would be incredibly satisfying and motivating to track a habit that you are already doing on a regular basis. Pick one or two of these things that you do everyday and start by tracking those. There's not much that can bring you down more than a blank tracker - an everyday reminder that you are not making progress, so be sure to choose something you do often so that you can fill up that tracker! 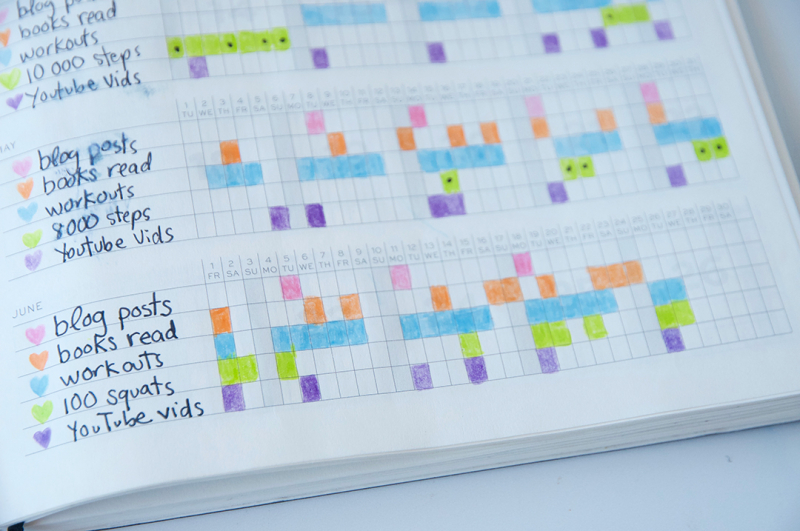 For June I was following a 100 squat a day challenge with Blogilates but since she was doing it on Instagram Lives at 9am her time, it was 6pm for me, which is time to bathe and feed my children and so I just wasn't able to make it a habit. Since I was tracking the challenge, I could SEE that I wasn't getting them in. If I hadn't been tracking I would have given up, but since I didn't like all those blank square in my tracker, I kept at it. I haven't done it every day, but I've done it a whole lot more than if I wasn't tracking and most importantly, I didn't give up!

We tend to focus on the negative and turn a blind eye to our accomplishments. So make a commitment to yourself to track those little daily wins! If you are having trouble finding a habit that you are already doing, reread or rewatch the list of 28 habits to see if you already have one of those habits down. Those are a bit on the complicated side if you are just starting out, so watch this video for 10 fun and simple habits to track.

Start slow, don't pick a whole bunch of new habits at once. If you don't go slowly, you will end up disappointed. Focus all your attention on just one new habit and one already established habit to get you started. Then you can add in a new one next month.

I know you are probably thinking that you want to go ahead and jump in with both feet and try all the habits now to make some real progress towards your goals. However, if you do that, you won't be able to give each new habit the focus it needs. You will most likely get frustrated and give up. Or, best case scenario, you do stick it out, but each habit will still be weak, and not really engrained until much later. Which will be pretty much take the same time it would take you if you took it one habit at a time. So you may as well get them engrained in your brain, one by one - so you can really nail that one habit before moving on to the next. They say 3 weeks, but it's best to keep focused on it as you add in a new habit to make sure it's doesn't fall away.

For July, I'm going to add in a new habit that I'm working on. I'm going to try and plan for my day the night before. What about you? Let me know in the comments below what Habit you are going to track for July!

I've got a lot of pretty planner products. I've gotten supplies by being on teams, I scrapbook, I've got a kit that comes my way every month, and let's be completely honest here, I can't resist pretty washi!! All this pretty stuff could get really overwhelming, but I've got a system. Without this system, my beautiful studio would be in chaos! If you are overwhelmed by product and planner goodies, follow my system, adapting it to fit your needs. You don't need an entire room. You may only have one cupboard to store you planner goodies. Whatever your storage, you need to keep it organised to keep yourself sane, and your space chaos-free. Try my 6 step system below:

In this video, I show you my Alex drawers and give you a peek inside. One of these drawers holds my 'new' things, others hold my products from Carpe Diem and Paper House. Hit play and have a snoop!

This video is from a few months ago, if you haven't seen it yet, I take you on a tour of my craft room! Grab a cup of tea and come on in! 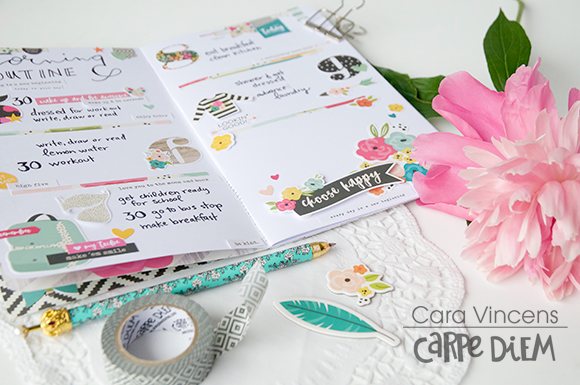 check out more pictures on the Simple Stories blog

Last week I gave you a list of 10 ways to create habits that stick. Now, I've got some ideas for you on what habits you can start creating!

First though, let's talk about the word 'success' for a sec. For me, being successful doesn't only me rich, powerful or famous. For me, the true meaing of success is to be living the life you want and loving it! To be successful is to be truly happy in your life, doing the things you love.

So consider that when you are deciding on what habits you would like to create. 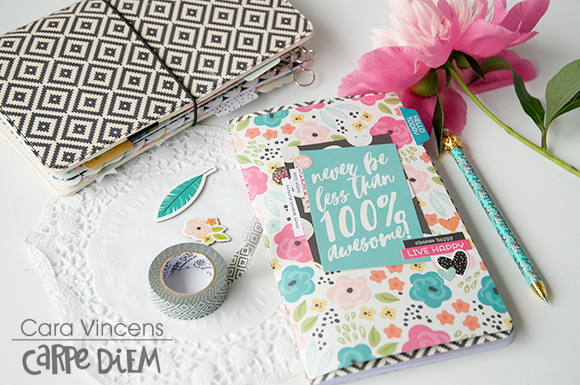 There is no magic formula! Different habits work better for different people. If you google 'habits for success' you are going to get a large variety of habits and different conbinations of them too. Different habits will have worked differently for the different people who wrote the articles/made the YouTube videos/wrote the books that come up in your google search. You need to choose the habits that work for you and for what you want.

But where to start?

How do you know which habits to choose? I say start with just one. Start with the ONE on this list that jumps out at you the most. Or maybe, as you read the list, you'll get another idea for a different habit that's not even on the list - go for that one! If you've got a few that appeal to you, just pick one. This isn't rocket science, eeny meeny miney mo will work just fine ;) 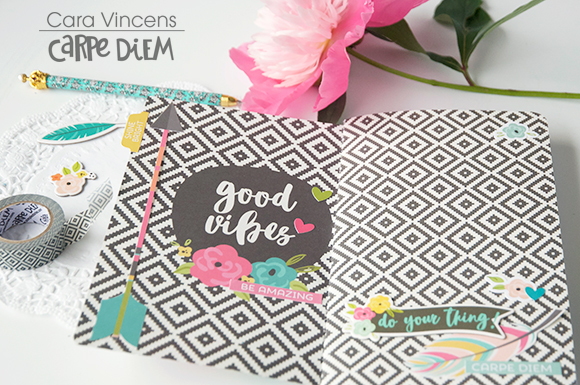 Once you get one habit solidified (again see last week's post), then you can start on a second habit, but make sure you give each new habit enough time to really become second nature before adding in a new one to the mix or you risk losing that first habit.

If you'd like more details on each of these 28 habits watch this week's video below. I go into some of the habits that I find difficult and I have a challenge for you!

Let me know in the comments below the ONE habit from this list that you are going to start with. 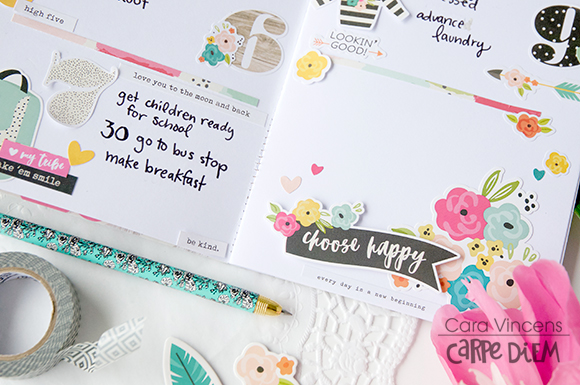 10 Ways to Create Habits That Really do Stick

A question that we often ask ourselves is 'How do I break bad habits?' Since I'm more of a cup half full kind of girl, I think a more positive, self-affirming question that we should be asking is 'How can I create good and healthy habits?' 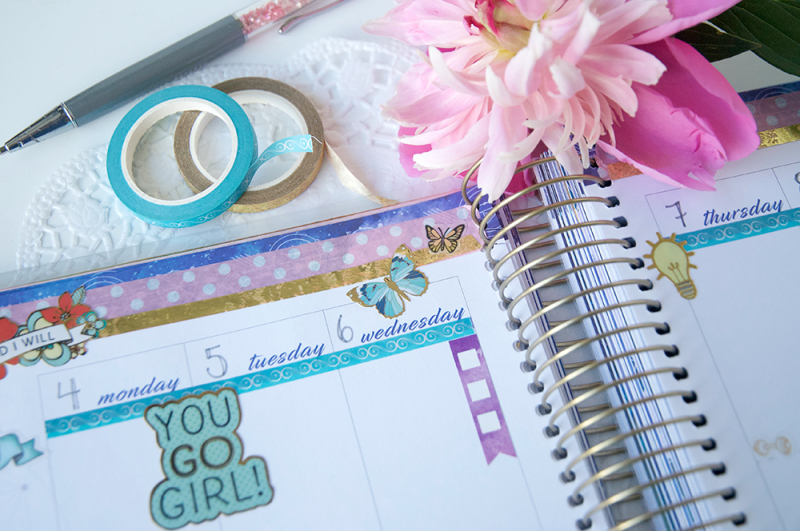 Creating good habits leaves little room for bad habits. Healthy habits can also replace the bad and improve your productivity, organisation, health, mood and more!  I've got 10 tips for you to start creating a new healthy habit today that will make it stick!

I've got a free printable cheat sheet for you too, so make sure you read to the end to get yours!

Phew, that was a lot to take in! I know that it can be overwhelming so I have some things to help you out.

You probably won't want to come back to this post every time you're stuck with a habit, so I've created a printable for you to stick into your planner. It's a Cheat Sheet with the 10 tips listed. It'll be easier to flip to that page and check rather than come back here every time. You should also bookmark this blog post so that when you do need more of a refresher than the list on the printable you can find it easily.  Click on the image below to get your free printable Cheat Sheet: 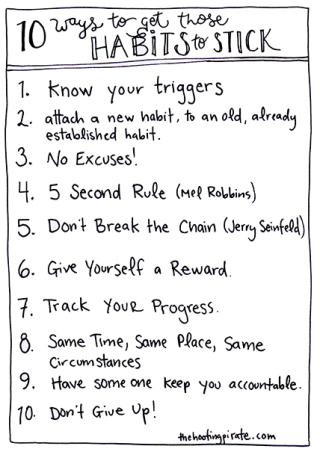 I've also created a YouTube video, if you are more of a visual learner. It's a summary of the tips that I shared here, so you can go there if you are stuck as well. I want you to nail those habits so I've created these great resources to help you succeed!